Simon Parkes: Hello this is a quick update on Connecting Consciousness and exciting news. You are aware of course of the 5G defense sticks, which we’ve been promoting on the website for the guys who are behind it. I want to give you some news, some update, which is quite exciting. The scientist behind it, his name is Lucky, that’s for short, and Jacques, who’s another scientist who’d been doing the work, have agreed to take part in a sort of a roundtable with me, and I’m going to be able to put questions to them. And it’s a fantastic opportunity. If you were thinking of buying one of these sticks, or you’ve already bought one, a great chance to actually see the man who’s invented it and the process on that. And a good chance for me to put some of the questions that you yourself have written in to me, and I’ll put them to the two scientists. And that’s really great. So that’s something I hope to get sorted out in the next week.

Getting these three people together, myself and the two scientists, is not always so easy. They’re in different countries, but hopefully they can meet up somewhere, and then at least the two of them are together, and then we can try and arrange it. Different time zones always make it quite hard. So that’s a really fabulous opportunity. You’re seeing that more and more on YouTube, where, you know, there might be an advert, and you know, you meet the guy or the woman, who’s invented it and they’re talking about it. It’s a different way of business. It’s not like the traditional, where you go to a multinational or you go into a store and, you know, you’ve got the sales material, but you never really know who’s behind it. And that’s, I think, the great thing about the internet and smaller, you know, innovative methods of found a different way to connect with the public. So I’m really pleased that they have agreed to it. It’s my suggestion. I wanted that, and they’ve agreed to it. Both scientists, although they’re not English, they do speak English. So, you know, that will be okay for the English world, but I think, that they also speak Serbian and French, and so, you know, there’ll be a chance for, perhaps at a later date, for them to do some interviews in their own language. That’s the first thing to tell you about.

The second thing is that all those of you, who have bought one of these sticks or those of you, who are thinking about it, you’ll know, that the logo on it was a logo, that we had to agree very quickly, because of the laser process to make this. And we went for Saint George slaying the Dragon, which for me was a really nice little joke about, you know, the Reptilian being defeated by humanity. That’s why I thought, that would be a really good image to have.

Now, what’s been agreed – and we’ve just had a Skype meeting some half an hour ago – is that for those of you, who have already bought a stick, who are thinking of buying it, and you are a member of Connecting Consciousness, in February Connecting Consciousness’ logo will be put upon these sticks. So the Saint George and the Dragon will be removed and the Connecting Consciousness. And you will receive a free stick with our logo on it. You do not have to return the old one, so in effect you will have two sticks for the price of one. And this is a thank you to the organization, to Connecting Consciousness, because it’s recognized, that when you have a group of spiritual people, they are perhaps closer to the truth than many of the ordinary people out there, and it’s a nice thank-you gesture, because we are all, and that includes the scientists, very great lovers of the planet. We’re very great lovers of the consciousness, and as you get the chance to watch the roundtable talk, you’ll get a feeling for these scientists. They’re not your traditional white coats, you know, sit in the corner and peer over a microscope and not be able to hold a communication. You’ll find these two refreshingly different. So let’s just to repeat and confirm, that if you’ve bought a stick and you are a member of Connecting Consciousness or you’re about to do so, you will receive the stick with Saint George and the Dragon. Come February when the Swiss factory is up and running properly, you will get a free stick with our logo on it, Connecting Consciousness, and you don’t have to give the other stick back.

I would ask, that you don’t sell it on eBay. I would ask, that you give it to a family member or a friend to spread that protection about, or the one with the Saint George and the Dragon, you keep that in your house plugged in and the other one, the new logo, with our logo on it, you put on a keyring, ‘cause it’s gonna be slightly different, and you carry that with you. So you have a personal one, which is ours with our logo on it, which you have around to protect you, and you have the original one, which you keep to protect the house. You might have animals in the house. You might have kids in the house, that are there when you’re not, so you wanna keep that one in the house. So that’s a wonderful deal, that we have struck for my members of Connecting Consciousness, two for the price of one, and we’re gonna have that roundtable video. So I wanted to share the news with you. We just organized that some 35 minutes ago now, and I really wanted you to hear about that, so watch this space. All right, thanks a lot. Speak to you soon. Bye-bye. 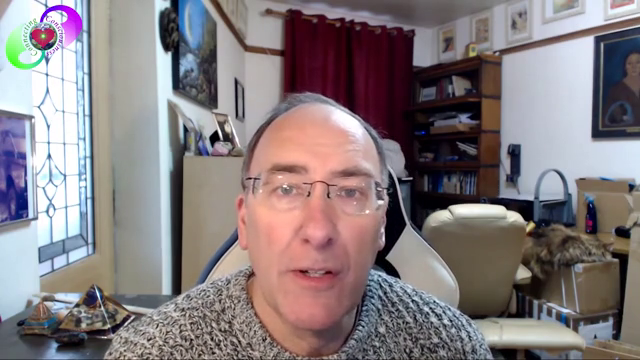